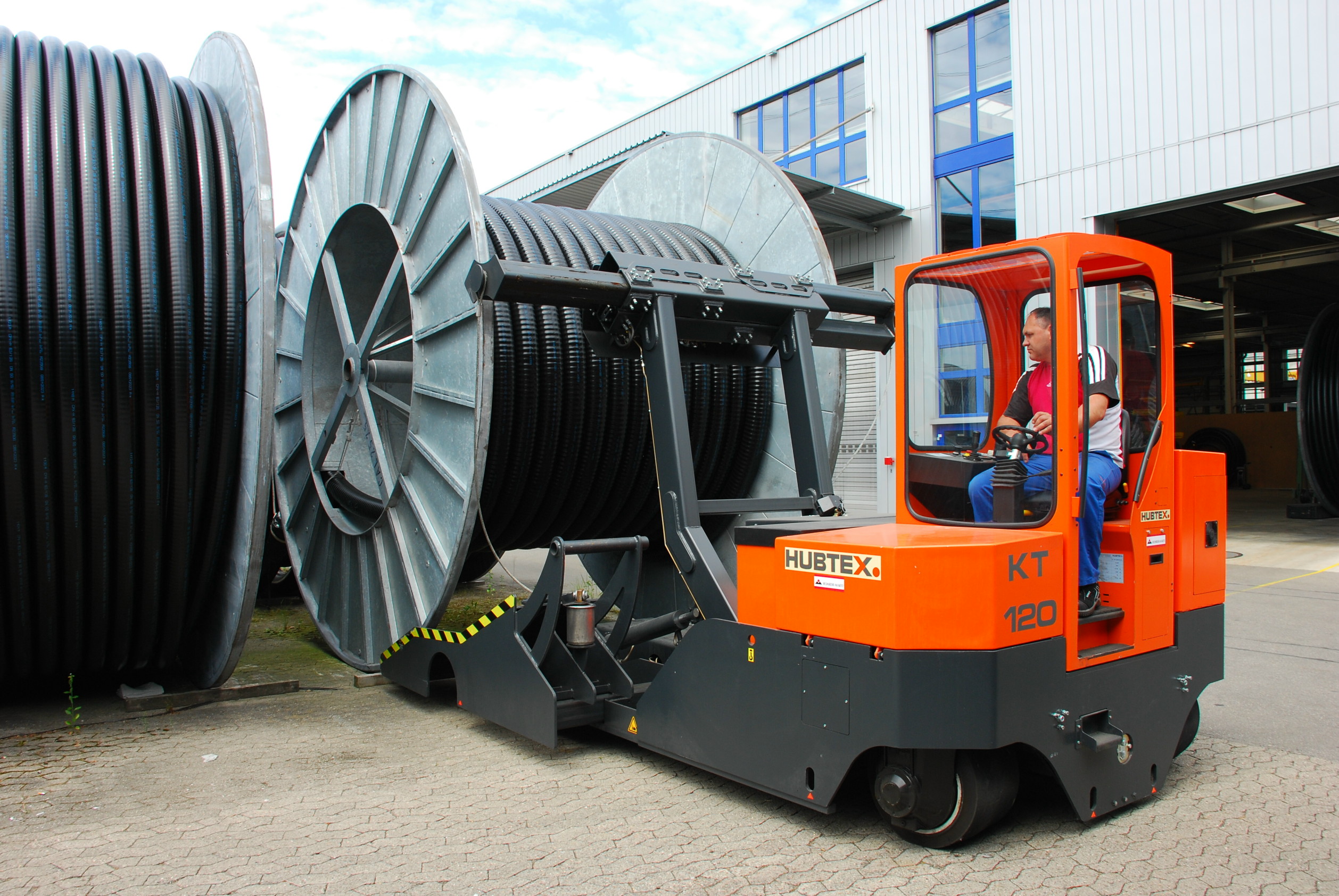 Owing to the pipe drums having become heavier, both the old special transporters in use at Brugg Rohrsysteme (Switzerland) had reached their limit. The susceptibility to breakdowns increased, the downtimes were longer as well and the productivity was unsatisfactory. Therefore, Brugg commissioned the specialist from Fulda, Hubtex, to find a new solution in the form of a special machine for moving up to 12 t of heavy pipe drums. Just six months passed from the first idea, through the intermediate in-spection and up to final shipment.

Now, the special Hubtex vehicle transports drums with a diameter of 3 to 4.5 m from the Brugg production lines to the warehouse; the two older ma-chines are still in use. Pipes of length between 800 and 3200 m can be wound. With the insulation and armouring, the pipes reach outer diameters from 75 to 182 mm. Brugg manufactures them for customers in the energy sector; the pipes carry water for heating in long-distance and short-distance heating networks. In view of the boom in the energy market, the turnover in and quantities of insulated pipes in recent years have almost doubled.

Alfred Oeschger (Director, Production) explains: "Special machine - that probably sounds like a sizeable investment, and even more so when one considers expensive spare parts.“ But in this case, Hubtex was able to use parts from the standard range for the required carrying capacity of 12 t. There were no special components required, neither for load carrying nor for the drive components; even the driver's cabin was picked up in its entirety from the standard range. Only the undercarriage and the lo-cating ramps for the pipe drums were designed from new. This resulted in favourable costing, since all the possible wear/spare parts are available as Hubtex standard parts.

Oeschger explains the order placement procedure that ultimately awarded the order to Hubtex: "We knew that there were not many providers in all of Europe who were able to make us a convincing offer from a standpoint of know-how and the cost frame-work.“ The clear specification of the goal from Brugg was that above all, the suscepti-bility to malfunctioning and the consequent need for repairs that was the result of faulty design in the old machines would be eliminated in the new machines. During an on-site appointment in Switzerland, Hubtex generated a functional specifications doc-ument in which all the requirements including the unfavourable outdoors ground condi-tions (canal covers, pits and furrows) were specifically noted. Hubtex expert Juan Cantalejo (Director of Sales) explains: "The suspension of the load take-up wheels had to compensate for ground unevenness and stresses transferred into the frame construction kept to a minimum.“ In the old machines, cracks had been formed and the frames had got warped. For higher loading capacity and better terrain adaptability, Hubtex enhanced the diameter, width and quality of the wheels. Overall, Hubtex de-veloped another, completely new undercarriage concept for the machine.

The drum transporters are operated via a remote control or a driver's cab.